With no Nuclear Power campaigners at any major UK NGO there's a danger of the reappearance of Nuclear ambivalence, maybe particularly with 2020’s high profile defection of the Extinction Rebellion (XR) newspaper "Hour Glass" editor to pro-nuclear power propagandist lobbying.

These briefing notes aim to prevent that scenario developing and was requested in response to PM outlines his Ten Point Plan for a Green Industrial Revolution for 250,000 jobs - GOV.UK and £40 million to kick start next-gen nuclear technology - GOV.UK by the Coalition’s Political Strategy Working Group.

taking more than a decade to build;

no current safe or adequate waste storage solutions, even after 70 years of operation;

the mind-blowing monumental cost compared to the Renewables displaced:-
​​​​​​​

Nuclear Power is not low carbon. 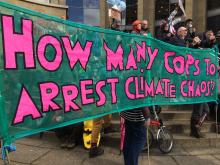 So, the mouldy green dust of the "climate Davos" has settled on another COP "negotiation". 27 years on and the story is still: can; kick; road. Rather than consigning coal, oil and gas to the past, the first mention in text ever for "fossil fuels" was in a weak reference to removing ‘inefficient subsidies for fossil fuels’ with a ‘phase down’ of coal that doesn’t even mention gas or oil!  COP26, more impotent than important.

On the 5th and 6th of November 2021, aviation protest actions across the globe coordinated by Stay Grounded, called for an end to aviation’s greenwashing and an effective reduction of air traffic. The diverse protests were part of a Global Day of Action called by the https://cop26coalition.org/gda/  a UK-based civil society grouping, mobilising around climate justice during COP26, the UN Climate Conference in Glasgow. In addition to the 18 events for 12 UK expanding airports, protests also took place in Mexico, Nepal, Germany and France.

Aviation is the most climate-damaging form of transport and one of the worst examples of climate injustice, so nobody should be fooled by attempts to greenwash aviation. New technologies and so-called ‘sustainable’ fuels will take decades to be used on commercial, long haul flights – and it is these flights that cause the vast majority of aviation’s climate wrecking emissions. (Check out 5 Greenwashing Factsheets here:- https://stay-grounded.org/greenwashing ). Research shows that relying on techno-fixes will not decarbonise the aviation sector rapidly enough to stay below the globally agreed 1.5 degrees C limit; and the UK government’s advisory body, the Climate Change Committee, recommends NO net expansion of UK airports and has repeatedly warned the government that technological solutions alone will be insufficient to make the aviation sector even net zero by 2050. Yet, every UK airport has plans to expand.

In this context we took to the fields and streets to counter greenwashing and aviation expansion. In what rapidly became a full Week of Action, Rising Tide UK co-ordinated the Stay Grounded activities in the UK for airports at:  Bristol, Doncaster-Sheffield, Gatwick, Glasgow, Heathrow, Leeds-Bradford, London-City, Luton, Liverpool, Manchester, Southampton and Stanstead. Our press spokesperson Ray Stewart said:-
"We warn that trusting yet-to-be-developed technology to reduce climate-wrecking emissions is an extreme risk we cannot afford to take. Instead, we demand immediate action be taken to prevent aviation growth to cut associated emissions, for us to stand any chance of remaining within 1.5C.”

18 events for 12 UK airports showed what happens when we get together and co-ordinate united action around common themes under the Stay Grounded UK Chapter umbrella. So well done to those groups that took part and thanks to those who acted as group spokespeople, took photo's and did techy stuff. Lets have more groups covering more airports next time! We encourage those groups to visit https://stay-grounded.org/how-to-become-a-member/ .

Here's a round-up of what happened and where, with media links of which we're aware.

As you may know traditionally Rising Tide UK has opposed the UN-IPCC COP climate talks process from Kyoto onward as we don't think the solutions we need will come from governments, let alone in the speed we need them - but we decided to join the COP26Coalition (of UK civil society) as this COP is in the UK and to maybe add to the more radical voices within it, organising around COP26 in Glasgow and beyond. Toothless Paris Accord voluntary Nationally Determined Contributions (NDC) are currently still 24bn tonnes short of preventing 1.5C heating and on course for 3C+. 6 years past the Paris Accord, climate finance reparation $100bn a year promises remain unfullfilled without any clear intention to provide financial support for "Global South" low emitting countries and island states about to be literally submerged.

Below is our latest attempt of summarising the current Coalition & COP status. Feel free to use and spread wildly (that was supposed to be widely but actually we'd prefer wildly).
If you're not travelling to Glasgow then worldwide there are demo's and marches etc happening on the 5th & 6th November linked below that you can get involved with but there is always an option to get together with your friends and pull off an action of your own targetting carbon infrastructure and their greenwash shenanigens. Some help here: http://www.networkforclimateaction.org.uk/

Plenty of false solutions abound especially those inherent in Article 6 discussion at the COP which is pretty nailed-on to see government acceptance and support for carbon business as usual offsetting (particularly within the aviation sector with COP sanctioned CORSIA); in all its guises like the attachment of tradable market mechanisms to "Nature Based" and "Natural Climate" "Solutions"; also the bogus radioactive head of nuclear power elbowing-in for a last gasp attempt.

SEE BELOW FOR DAY BY DAY COP26 CALENDAR & ALL THE DETAILS AND LINKS YOU NEED!

Last week the Meteorological Office published the State of the UK Climate Report showing that 10 of the hottest years on record have come in the last 16 (since 2002). As you know the UK Parliament passed unanimously a motion declaring a Climate Emergency. The UK government acted upon the Committee on Climate Change’s (CCC) headline advice which was:
“The UK should legislate as soon as possible to reach net-zero greenhouse gas emissions by 2050. The target can be legislated as a 100% reduction in greenhouse gases (GHGs) from 1990 and should cover all sectors of the economy, including international aviation and shipping”.

Given our work has so many overlapping priorities we've agreed to work together with RtP in London (& Bristol) and hold joint meetings. One of the reasons we have got together is to support this camp to highlight a future of connected communities and a climate justice movement that recognises the rights of everyone - a mass action camp for migrant and climate justice, taking direct action against new gas infrastructure built by Drax, shutting it down and also training-up and learning how to support resistance to the UK's Hostile Environment for migrants to take action later this year. https://www.facebook.com/events/584658665344782/

Hopefully this may enable you to make what sense can be made around Heathrow expansion?
As you know even before the intended £18billion further expansion, Heathrow is the UK's biggest emitter of Greenhouse Gases at a time of Climate Breakdown emergency.
Another runway would boost current flights of 480,000 to 740,000 seeing passengers rise to 132 million effectively creating a new airport the size of London Gatwick!
FALL-OUT FROM JUDICIAL REVIEW (JR);
HEATHROW AIRSPACE & FUTURE OPERATIONS CONSULTATION;
AVIATION GREEN PAPER ON FUTURE STRATEGY